Watermelon – a real summer treat and we are eating lots of it up here in Auckland.   Put in the fridge before slicing and you have Nature’s sorbet – cold and refreshing, juicy and sweet.  Beau with my niece Jessie picked out this watermelon at the Wesley Community market on Sandringham Road.

A couple of weeks ago I prepared a dinner for 12 friends and served a watermelon salad after the main.   I treated the salad as you would a sorbet, to cleanse the palate after a full flavoured main. If you serve a salad with the main event, so often it gets lost and unappreciated. By serving it on its own it turned out to be one of the star turns of the evening.

Cutting up the watermelon and taking out as many seeds as you can is what takes the time with this salad.   You could let people sort out the seeds for themselves but for our dinner we went that extra step to take them out. 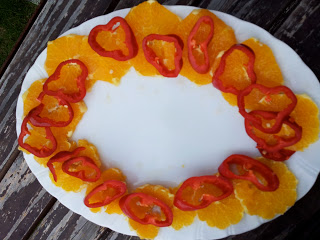 I decided to contrast the pink of melon with an edging of oranges and red peppers and a touch of green with rocket leaves.
Next pile in the centre the watermelon.
Follow this by adding feta.  I ignored my rule of trying to keep regional and for that special night used a sheep’s feta that came from Bulgaria.  It was truly delicious, affordable and just perfect with the watermelon.

The dressing I wanted to keep light and with a hint of sweetness.   As my friend Kate got us all together for the dinner I wanted to use some of her gorgeous Waitaki Valley honey in the dressing.   (I had to leave a lot of treats behind in Dunedin but I did find room in the car for Kate and Pete’s creamy honey).

1/4 cup of avocado oil (lime infused)
half a squeezed lemon (to taste)
Salt and Pepper
Heaped tsp of honey
Mix all together to melt the honey and taste to see if the balance is right.
I dipped in a piece of watermelon to test the taste.
Alternatively mix the feta through the dressing before placing onto the watermelon and then dribble over the dressing.  The avocado oil makes the dressing a rich green.
Finish off the salad with torn pieces of basil or thinly slice mint and sprinkle over the top.
For that special dinner I had half a pomegranate so I picked out the seeds and added them to the salad, then squeezed out the pomegranate juices over the watermelon.   The sharp zing of the pomegranate seeds with the sweet melon are a heavenly combination.

Watermelon is listed as one of the top aphrodisiac foods – even claimed to have Viagra-like effects on the body.   Scientists have found watermelon contains large amounts of a plant nutrient called citrulline, which is known to have beneficial effects on the cardiovasular and immune systems.  The chemical can relax blood vessels and improve blood flow.   But researchers say it isnt organ specific like Viagra and most of the citrulline is found in the rind of the fruit.
(ref: Health.US News)
For those interested in pursuing this beneficial nutrient citrulline,
I discovered a blog that offers a method of pickling the rind of watermelon.

Real men may eat watermelon but also consume lots of whey protein as Peter discovered while being diligent about his orange peel, placing it in a bin outside the Auckland Blues High Performance Centre while at Unitech.   Being a tidy Kiwi paid off when he discovered two large plastic buckets with lids discarded in the bin.

Everyone in the family was on high alert to find suitable buckets for our number 3 Bokashi Bucket composting system.   For this composting queen, Peter’s gift of the buckets was just as appreciated as a bunch of flowers.

To make the Bokashi bucket drill holes in the bottom of one of the buckets and use the second bucket as the draining bucket.

Having buckets the same size has meant that it’s easier to pull the buckets apart when pouring off the juice every second day.

I have discovered by involving everyone in the family in the Bokashi composting process, it has been easy to get it right as we all know not to put in liquids and to push down the scraps after each daily addition to get rid of trapped air.

If you want to know more about the Bokashi system then read my previous posting.

Last Friday night Peter was lucky enough to get to see the Auckland Blues play at Eden Park.  He says the protein must have worked because they easily beat the usually unbeatable Crusaders.

You could say we now have “celebrity” composting buckets which are rapidly being filled with all those watermelon rinds.   Perhaps I should try to pickle them.