Christmas came in the first week of November at our house when my son Gus asked that I cook a ham and try out a glaze using his Augustines of Central quince paste.  We produced recipe cards to hand out to customers at  tastings in Auckland last weekend. 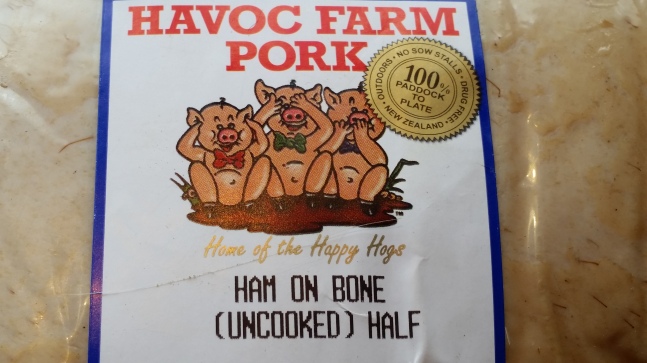 I could have simply purchased a cooked ham off the supermarket shelves to glaze, but I decided I would use this as an excuse for a pre-Christmas family get together and chose a locally produced free range ham. Havoc Farm pork give cooking instructions with their hams and I had two options, cooking the ham wrapped in foil or bake it in a flour casing.

I remembered Mum used to cook her hams in a flour casing before foil became the easier option. She would also soak the ham overnight to get rid of excess salt but this is not necessary for the Havoc cured ham. 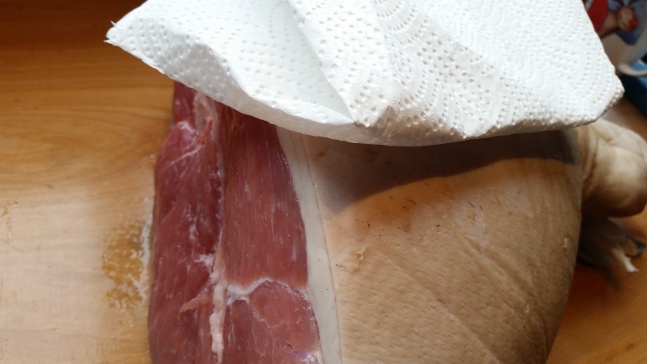 They do suggest after removing it from the vacuum pack to wipe it down and hang in a cool place  protected from flies for an hour or two. 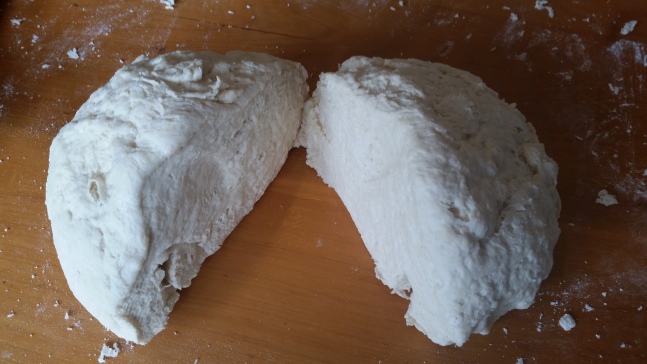 I chose to try the dough casing method. In the recipe it was suggested 6-10 cups of flour made into a dough with water.  I used 7 cups of flour.  Divide the dough into two pieces and roll out as you would pastry.

Place your ham on the first rolled piece of dough and cover half the leg.  It does have some stretch.

Now use the second piece to completely seal the ham. The aim of the casing is to keep the ham moist and avoid drying out over the long cooking time.

I cooked it at 150°C for 45 minutes per kilo plus an extra 30 minutes for luck. Leave plenty of time for cooking the ham – the process will take most the day and cannot be rushed. As a ham rather dominates your oven space an easier option for Christmas is to cook the day before and glaze on the day or indeed glaze on the day of cooking and enjoy the ham cold.  I cooked and glazed the ham in one step and prepared the glaze towards the end of the ham cooking time.

It’s an easy job to crack and peel off the flour casing. Removing the skin does take longer and wait until the ham is cool enough to handle.  Don’t rush this step as you want to make sure a layer of flat remains on the ham for the glaze to sizzle on.

I have attached a copy of the Augustines of Central recipe card for the recipe and method.

Place the ham covered with half the glaze on a rack over an oven dish that has a 2cm of boiling water added.  This moisture helps the ham not to dry out while being glazed. Cook for 45-50 minutes basting with extra glaze as required until the glaze darkens to create a ruby red skin. Be careful not to burn.

I presented the ham on a bed of watercress as the green contrasted well with the red.

The glaze certainly adds to the appeal of a Christmas ham but probably the most important choice is the ham itself.  My brother announced it was the best ham ever!  I think the casing helped to keep the ham moist during the baking but the way the pig was raised and the curing is perhaps the biggest flavour factor.  Ham is a once a year treat for us so I wanted to make sure it would be the best looking and tasting ham it could be. While it costs more to buy a local free range ham,  I was pleased with my choice.

Ironically, we got the cards produced and then discovered that both of Gus’s new products, quince paste and apricot jam, had nearly sold out at the Farro Fresh stores in Auckland. There are still a few jars at Grey Lynn Butchery to be had but unfortunately Gus’s ruby quince paste is now sold out. The recipe cards will be handy for next Christmas as Gus is looking to quadruple his production in 2017.

This recipe can use any quince paste, and you may make your own quince paste. This glaze will certainly make your ham a feast to look at this Christmas.